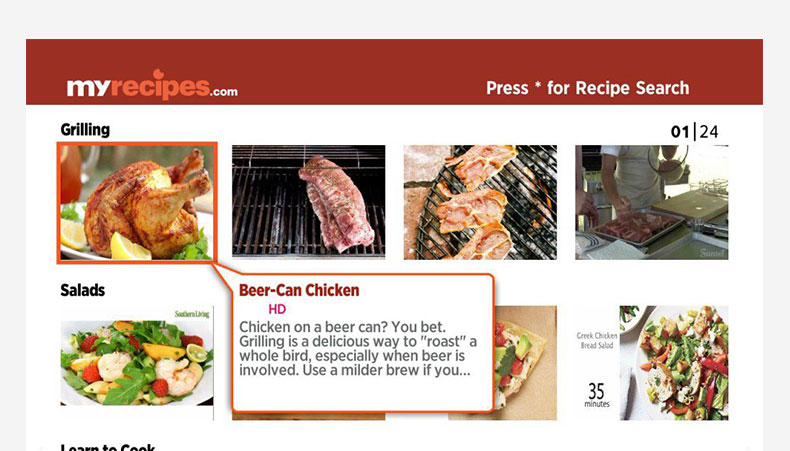 It looks like there’s a way for us to have our cake and watch it too.

On June 12th, Time Inc. announced that MyRecipes.com would be launching a new MyRecipes channel on Roku, a digital streaming service that allows customers to access video and audio from the internet on their TVs. MyRecipes.com, an online resource from Time Inc., has been centralizing content from popular magazines and cookbooks like Real Simple, Cooking Light, and Coastal Living since 2007. The site contains the largest collection of professionally-tested recipes as well as countless how-to videos and other resources, and, following this collaboration with Roku, this material will be accessible from a TV. The channel will house 250+ videos in 12 categories from “Grilling” to “5 Ingredients or Less” to “Chefs and Restaurants.”

This project is a continuation of Time Inc.’s campaign to focus on digital, particularly video, content, a push they highlighted at last month’s NewFront. It was at this event that they initially announced their partnership with Roku, as well as new partnerships with other media distributors, such as Ulive, DailyMotion, and Net2TV.

This all reflects the technological boom that has been the story of the last couple decades and which has largely affected the media world. It is no longer enough for the media to report on advances of our digital age, but now, they too must advance. They must advance into the era of video and live streams, the era of audio and interactive material. Through partnerships, such as that between MyRecipes and Roku, Time Inc. and other media companies are showing their readiness to do so. And it doesn’t hurt to learn our way around the kitchen at the same time.